Would you believe, that during our busiest boarding months, we consume 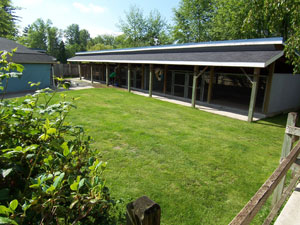 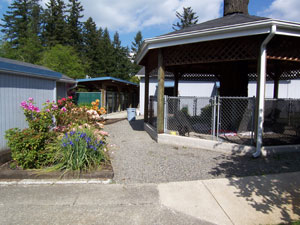 The owner of Gillshire Kennels, Liz Thompson, purchased the kennel in 1981, from a couple who operated a 'mom and pop' business. Working 20 hour days, as new business owners are apt to do, Liz did all the cleaning, feeding, grooming, telephone work, purchasing, customer service, and poopy scooping.

It was during this time that she began to develop the standards and animal care procedures that would eventually be the foundation of her success.

The first kennel employee was a professional groomer, which gave Liz more time to spend with customers and their pets. It was slow going those first few years, but the word began to spread: for people who treat their pets like a family member, Gillshire Kennels is the only place to board.

Every couple years, Liz added another kennel employee to help her take care of the animals. The kennel has always had a larger 'staff to pet' ratio than any other kennel, because it takes people to give quality care. Whether you're talking 'nurses to patients' or 'waitresses to customers', the better the ratio, the better the care and service. It's no different at a kennel.

Unwilling to cut corners on quality dog food, cleaning supplies, or staff, it took nearly 10 years for the kennel to turn the corner financially. It took that long to develop a customer base that would keep the occupancy rate high during the 'off' season.

Most kennels are full during tourist season and holidays. But it is unheard of in this area, for a kennel to have a 60% occupancy rate in February, like Gillshire Kennels does.

So, in the early nineties, Liz was able to begin expanding the kennel facilities. The size of the 'little house' was more than doubled; the outside play yards were expanded and covered for year round use, a laundry room was built, a commercial washer was installed, a room was added on specifically to board birds, and a building just for cats was built.

The original buildings were upgraded and remodeled. On the drawing board for the near future: another commercial washer and more outside runs.

Currently, the kennel has 12 employees, Liz is still a 'hands-on' owner and works 6 1/2 days a week.

Chances of a second kennel location or franchise: when those Scottish scientists perfect human cloning 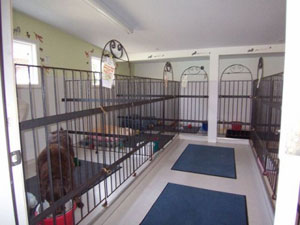 For as much as everyone around here likes to talk, it sure is difficult to get them to talk about themselves!

The owner: Graduated from the University of Puget Sound with a biology degree. After working for several employers, she began searching for a position that would allow her to devote a lot of time to her hobby of breeding and showing Old English Sheepdogs, Dalmatians, and Shihtzus. Potential employers weren't very accommodating to her needs, so she leaped into the kennel business on her own.

Despite working with animals all day long, she has a little energy left over for her two dalmatians, cattle dog, kitty, and amazon parrot. She is married to the kennel, likes to go dancing with her other husband, bowling with the 'girls', and secretly gets a thrill when she denies her sixteen year old step-son's request to drive her cherried out mustang.